If your dream is to someday become a drone pilot, you’re probably already aware of the many rules and regulations that go into becoming certified. On top of the required aeronautical knowledge, Part 107 drone airman or remote pilot certificate, a variety of online training and more, aspiring drone pilots also need to be well-versed in the NATO phonetic alphabet. Once you’re ready, you must take an exam through the Federal Aviation Administration (FAA).

What is the Phonetic Alphabet?

Colloquially known as the “Airman’s Alphabet”, this mode of communication was formed in the 1890s to guarantee clear and simple communication for pilots under any circumstances––even staticky radio frequencies or phone calls. The goal is for the phonetic alphabet to be understood just as well as our ABCs, and it reads as follows: Alfa, Bravo, Charlie, Delta, Echo, Foxtrot, Golf, Hotel, India, Juliett, Kilo, Lima, Mike, November, Oscar, Papa, Quebec, Romeo, Sierra, Tango, Uniform, Victor, Whiskey, X-ray, Yankee, Zulu. The words were thoughtfully chosen and were deemed easily understandable by a variety of languages and accents.

Here are our top three tips for helping you absolutely nail memorizing the Phonetic Alphabet. A mnemonic device is a technique used in order to more easily memorize something, which usually takes the form of rhymes, images, patterns, or acronyms. Attaching a picture of what you’re trying to memorize to the letter of the alphabet. For example, D is Delta, and a way to memorize it phonetically could be picture Delta Airlines, with an airplane flying through the D. G is Golf, and you can imagine the G in the shape of a golf club.

F is Foxtrot, which can be memorized by imaging the lines in the F as horse legs, as Foxtrot is a sort of horse canter.

V is Victor, which you can memorize as “victory”, with someone holding their fingers up in the shape of a V.

These are just some simple examples of mnemonic devices that can be used to master the phonetic alphabet and nail that FAA exam. Once you have an image in your mind for each of the letters, the next best step would be to picture them all in your head to see if the images have stuck. Try picturing each of the letters with their corresponding images, and say each of the letters out loud. 3. Use a grouping method

Rather than forcing yourself to memorize all 26 letters all at once, a good technique is to group the letters together. This is not only easier because memorizing smaller groups is inherently more simply than memorizing larger groups, but if you group a series of letters together, you will more easily be able to associate them in groups. So for example, while practicing the phonetic alphabet, read them as such, with group 1 being: Alfa, Bravo, Charlie, Delta, Echo; Group 2: Foxtrot, Golf, Hotel, India, Juliet; Group 3: Kilo, Lima, Mike, November, Oscar; and so on.

Once you begin to feel more comfortable with the letters––no matter what technique you choose––begin saying them quicker and quicker. Try to get to the point where you can say them nearly as quickly as you can say the regular alphabet. Start off slowly, rely on your memorization technique as much as possible, and as you begin to get quicker, you should find yourself needing your memorization devices much less.

If you’re able to do this, congratulations! You’ve mastered the phonetic alphabet. Here’s your first test (and remember, answer in the form of a question!): 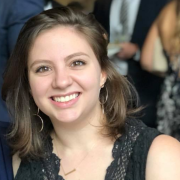 Cassidy Anthony is a journalist from Connecticut, but has spent the past few years living in France and England. She has developed herself as a writer through working for a myriad of publications, writing about topics pertaining to technology, art, sportswear, and more. Her background is predominantly in film and women's studies. When she's not writing, she's most likely petting dogs.